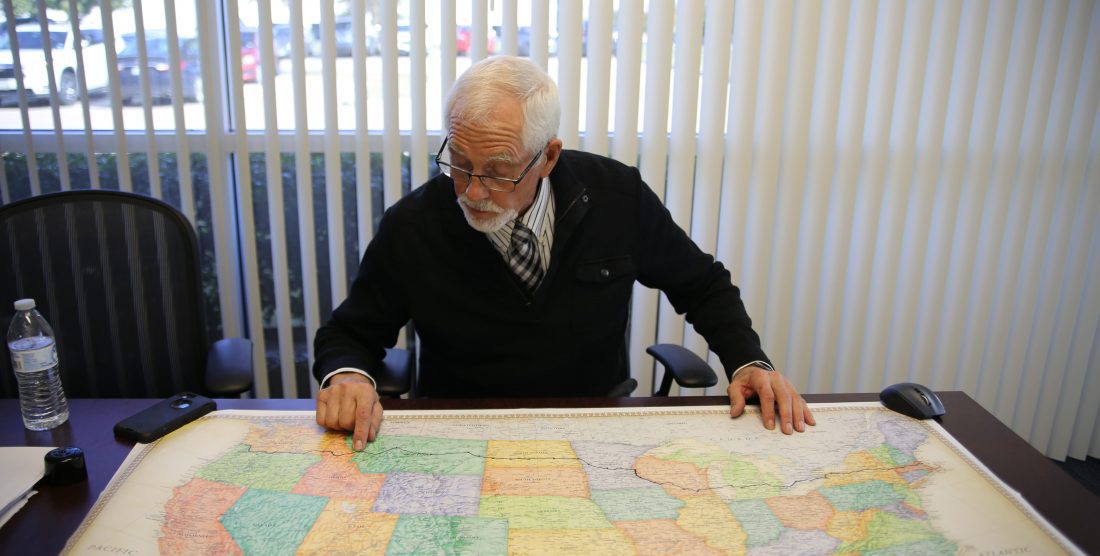 Ken Smith traces the route he followed on his amazing coast-to-coast Ride for Jakob.

In the extreme altitude of the Montana Rockies, with the day-time temperature over 100o F, for the twelfth day in a row, a 70-year-old cyclist followed a lonely road on his journey of love between the Pacific and Atlantic Oceans. He was riding to raise money for the care of his grandson, Jakob, who neurologists had not expected to walk or talk or live to his second birthday. His head down, his legs pumping steadily, and lost in the monotony of solo bike travel, Ken Smith pondered the miracle of his grandson, now 16 years old, walking but not talking, but in need of full-time care. He lifted his head and looked up just in time to see an enormous range bull standing defiantly in the middle of the road.

Smith slammed on his brakes and considered the situation. There was no safe way around the beast. It was just the two of them, looking at each other, on a hot, desolate stretch of two-lane highway. Having grown up on a farm, Smith had been around large animals and figured a loud shout would spur the bull to move along, so he shouted at the bull. But instead of spurring the bull along, alarmingly, the bull turned toward Smith and slowly lowered its head. Faced with the sudden likelihood of being gored or trampled to death by a bull, Smith instinctively shouted out, “God, I need you now!”

At that very moment a car appeared behind Smith. It was the first car that Smith had seen all day. “I didn’t even hear it coming. But the moment I asked God for help, there it was, as if out of thin air.” Surprised by the vehicle, the bull looked away from Smith and trotted off into the roadside grass, allowing Smith to continue his ride. “God was with me on my trip, said Smith. “Then, and many times.”

Powered by prayers, and Mannatech supplements

The costs involved in caring for his grandson are significant. As Smith thought carefully about what he could personally do to help with Jakob’s situation, he pondered a cross-country bike ride. “I realized that not many people will have ever seen a 70-year old grandfather cycling across the country. I’ve been blessed with excellent health and I decided to use my heart, lungs and legs to help provide for Jakob’s future care.”

Anyone embarking on a solo, cross-country cycling trip would likely need all the help possible, whether from Heaven, friends or strangers.  Smith, a grandfather and a Senior Citizen, received help from all of those, plus extra help from Mannatech’s nutritional supplements, which he believes increased his endurance, postponed exhaustion and shortened his recovery time.

“I noticed the benefits about two days into taking these supplements. I was already doing regular physical work, and I always got to about 2pm or 2:30pm and would get tired and stop for the day. The next thing I knew, it was 3pm or 3:30pm before I was tired. Then it was 4pm, then it was 5pm, and I’m thinking to myself, ‘something is different.’ And I felt it. EMPACT+ and Ambrotose LIFE were the only new things I was taking.”

“I did very little bike training before beginning the Ride for Jakob. In retrospect, I was not ready for it. But here is something I can say with every fiber of my body: My first day on the Ride for Jakob was 56 miles, mostly uphill, crossing Oregon’s Coast Range. I was on my bike a good eight hours. When that first day was over, I had no soreness or stiffness, no feeling that I had just done what I had done. I thought ‘Well, let’s see how I feel in the morning.’ I woke up in the morning – nothing. I had no fatigue, no soreness – nothing.”

Smith’s 3,502-mile coast-to-coast ride stretched over 56 days, and every morning he faithfully drank a mixture of EMPACT+ and Ambrotose LIFE, and would drink EMPACT+ additional times each day, and then again at night before sleeping, to help fend off exhaustion and recover from the wear and tear on his body. Smith strongly believes the supplements helped him. He enjoyed sustained energy, even during a 20-day streak in which daily temperatures exceeded 100oF.

“From the standpoint of endurance and not having the soreness and everything else. There’s no question for me. These products rock. They work. They just do. And it wasn’t just a one-day deal, I used them every day of the 56-day trek. And I seemed to have a lot more stamina and endurance in the last thousand miles than the first two thousand. That’s not what I would have ever expected. I’m 70 years old!”

A shot in the dark morning

On a dark, stormy morning, 55 miles west of Milwaukee, Wisconsin, Smith’s progress along a gravel trail was hampered by wet conditions, lightning and downed trees. He was averaging about seven miles per hour and had a ferry to catch in Milwaukee that would take him across Lake Michigan. The ferry had two sailings each day, one at 12:30pm and another at 7:30pm. If he didn’t catch the first sailing, it would cost him nearly a full day. As he consulted with another rider on the trail, also headed for the ferry, the younger rider did the math and realized they would need to increase their average speed from seven miles per hour to just over 20, if they were to make the ferry. “We probably won’t make the 12:30pm ferry,” said the other cyclist. “But let’s give it a shot!” Smith accepted the challenge and off they went, racing to, and through, Milwaukee.

On the road somewhere between Utica and Albany, New York, Smith crossed paths with another rider he described as “much younger than me,” large, 6’ 7” and very muscular. Smith’s planned stopping point for the day wasn’t far away, as he was only looking to complete 50 miles that day but decided to ride with the other cyclist a while. The other rider was headed for Schenectady, an additional 23 miles away, and Smith said to himself, “Why not?” and continued on, just hoping to keep up. He did. Upon arrival in Schenectady, the other cyclist stopped, turned around and with amazement asked Smith, “How old are you?!? You tracked with me the whole way!”

“Lord, it sure would be nice…”

While Smith occasionally found other cyclists to ride with as he headed east, much of the ride was a lonely affair over quiet, remote backroads and trails. “Very dark at night, very remote,” said Smith. But in that solitude, Smith had time to contemplate his grandson’s needs, his efforts for his grandson and grow closer to God, whom Smith could feel nearby.

“I don’t remember how many times I prayed out loud, saying ‘Lord, it sure would be nice…’’ Smith said. “If I was out of water, I’d say, ‘Lord, it sure would be nice to find some cold water,’ and just like that, someone would appear with water, or I would see a farmer in his field who just happened to have cold water at the ready. People would hand me money out the windows of their cars. People would pay for my meals at the end of the day. Police and fire departments would escort me into town. My prayers were always answered. Someone always showed up with something sooner or later.”

A prayer still needing an answer

Smith is now hoping that his faith, prayers and works, on behalf of his grandson, will also be recognized and answered. While his quest to cross the country on his bicycle was successful, he has not yet raised anywhere near the funds for Jakob’s future care. Smith has opened a Go Fund Me page that is still accepting donations for Jakob: https://www.gofundme.com/ride-pacific-to-atlantic-for-jakob, and is considering repeating his ride next summer, from east to west.

Mannatech proudly sponsored Ken Smith on his Ride for Jakob.